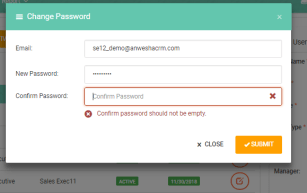 We now made it possible for the Saleswah user account admin to change the password for any user.

To do this, goto your admin area, and click on Users and Licenses.

Yes, it is that simple! Your users will be sent the new password by email.

The user will lose access to the CRM immediately. And, the Saleswah user license he had would not become available to be assigned to any other user without a license.

Remember, deactivating the user does not affect the data. All accounts, contacts, deals which were looked after by the user, would continue to be shown under him. Other active users, who had earlier access to his data, would continue to do so. In fact, he would continue to show up in the user hierarchy in all the lists- Contact, Account, Deals, Tasks etc.

As a matter of fact, this helps when a sales executive leaves and a new one is going to join in his place. So, you can transfer “the territory” from old to new with minimal disruption.

“I really thought the support was great.. they are a great alternative to the large and complicated systems from Salesforce and Microsoft…”

“Covers all the basics- totally customizable, all done by us. Tracks everything. It was an aswesome experience with Saleswah CRM and would like to recommend to all field service professionals”